And, for the first time ever at D23 Expo, fans will get to enjoy a daily street party, featuring celebrities, Disney characters, and live music on the show floor.

BURBANK, Calif. (June 13, 2017) – The excitement is ramping up from “zero to hero” for D23 Expo: The Ultimate Disney Fan Event. During the three-day spectacular, which takes place July 14–16 at the Anaheim Convention Center, guests will have the chance to celebrate the 20th anniversary of Hercules with members of the cast and creative team; hear from Disney Legends, including 2017 inductee Mark Hamill, during a panel hosted by Leonard Maltin; and enjoy the music of Walt Disney’s classic live-action musicals in a remarkable stage production featuring Lesley Ann Warren and hosted by Whoopi Goldberg. John Stamos will host a chat with Legends of Walt Disney Imagineering. Plus, theWalt Disney Archives will host three days of presentations on its own stage. And, for the first time, guests will be able to enjoy a daily “Ultimate Fan Street Party” right on the show floor.

The Golden Girls: A Celebration of Friendship, Laughter, and Cheesecake

In the 25 years since the final episode of The Golden Girls aired in 1992, the television series has become an enduring fan favorite that continuesto be watched throughout the world. Celebrate with us as we bring together the show’s creators and other special guests for this unforgettable event.

Join film historian Leonard Maltin as he celebrates the 30th anniversary of the Disney Legends program with a remarkable lineup of individuals who have each left an indelible mark on the Disney legacy, including Bill Farmer (the voice of Goofy and Pluto), Imagineering Legend Bob Gurr, Walt Disney Archives founder Dave Smith, and 2017 inductee Mark Hamill.

Melodies in Walt’s Time: The Music of Disney Live-Action Films

In the 1960s, Walt Disney sought to expand his filmmaking style beyond animation and bring music to a variety of new live-action film projects. D23 Expo will celebrate these magical, musical movies in a live stage extravaganza—hosted by Whoopi Goldberg and featuring Lesley Ann Warren, Karen Dotrice, and other renowned guest stars, joined by live musical performers and a 20-voice chorus—to showcase Summer Magic, Mary Poppins, The Happiest Millionaire, and The One and Only, Genuine, Original Family Band, as well as others.

Zero to Hero: The Making of Hercules

From the heights of Mount Olympus to the depths of the Underworld, celebrate the 20th anniversary of the Disney classic that put the “glad” in gladiator! Join a group of legendary artists and filmmakers who brought Hercules to life, including directors John Musker and Ron Clements, animators Eric Goldberg (“Phil”) and Ken Duncan (“Megara”), as well as Megara and Hercules themselves—Susan Egan and Tate Donovan—as they recount stories of making one of the most epic animated features of all time.

For eight decades, Disney fans have whistled “Heigh Ho” while they worked. Now, in honor of the 80th anniversary of Walt Disney’s first-ever animated feature, D23 Expo is proud to presenta special screening of the film that startedit all: Snow White and the Seven Dwarfs.

Join a fascinating conversation, hosted by John Stamos, with three Imagineering Legends—Marty Sklar, Tony Baxter, and 2017 Disney Legend inductee Wayne Jackson—as they recount true-life anecdotes and share personalstories about the celebrated artists, designers, and technical wizards who established the foundation and guidingprinciples for groundbreaking Disney experiences around the globe.

The popular Walt Disney Archives Stage returns, more than doubling its capacity, as it hosts 17 panels and presentations throughout the weekend. Disney notables, such as director Pete Docter, Disney Legend Jim Cora, producer Don Hahn, Bret Iwan (the voice of Mickey Mouse), Imagineers Diana Brost, Jason Grandt, and Chris Merritt, plus many more, will participate in panels throughout the weekend. Fans will enjoy exploring many of Disney’s worlds, from the incredible work of Marc Davis and the original characters of the Disney Parks (such as Figment and the Country Bears) to the women of Disney animation and an incredible virtual walk-through of the Walt Disney Studios on Hyperon Avenue. Visit D23expo.com for the complete schedule.

Located in the center of the D23 Expo show floor, Center Stage will be the heartbeat of the Expo and a hub of activitythroughout the weekend. AimeeCarrero, the voice of Disney’s Elena of Avalor, will perform live for the first time, and will be joined by special guests including Lou DiamondPhillips who voices series’ villain, Victor Delgado. Also performing on Center Stage will be TemeculaRoad, Tomasina, Billy Hill and the Hillbillies, nerd-rock group Kirby Krackle, and Susan Egan, who will sing favorites from Beautyand the Beast. Disney animators, including Eric Goldberg and Mark Henn, will show aspiringartists “how to draw” throughout the weekend. Marvel’s Brian Crosby will show fans how to draw Spider-Man and Groot. And BillRogers, the “voice of Disneyland,” will be on-hand each day to record fans’ outgoing voicemail messages in his signature dulcet tones. The comletelineup will be availablein the coming weeks on the D23 Expo app.

For the first time at D23 Expo, guests can enjoy a one-of-a-kind street party—right on the D23 Expo show floor. Twice each day the cavalcade will travel down Mickey Avenue, with a live band, beloved Disney characters, high-energy dancers, and celebrity grand marshals! Stan Lee and Mark Hamill will grand marshal the first cavalcade on Friday, July 14, and members of the cast of Descendants 2 will lead the second that day. Additional talent and times to be announced in the coming weeks and will be available on the D23 Expo app.

Talent subject to change. Additional details are available at D23expo.com.

D23 Expo—The Ultimate Disney Fan Event—brings together all the worlds of Disney under one roof for three packed days of presentations, pavilions, experiences, concerts, sneak peeks, shopping, and more. The event provides fans with unprecedented access to Disney films, television, games, theme parks, and celebrities. For the latest D23 Expo 2017 news, visit D23expo.com. Presentations, talent, and schedule subject to change. To join the D23 Expo conversation, be sure to follow DisneyD23 on Twitter, Facebook, Pinterest, Instagram, and YouTube, and use the hashtag #D23Expo.

The name “D23” pays homage to the exciting journey that began in 1923 when Walt Disney opened his first studio in Hollywood. D23 is the first official club for fans in Disney’s 90-plus-year history. It gives its members a greater connection to the entire world of Disney by placing them in the middle of the magic through its quarterly publication, Disney twenty-three; a rich website at D23.com with members-only content; member-exclusive discounts; and special events for D23 Members throughout the year.

Don’t you love watching Walt Disney on TV and YouTube – or just hearing his voice? I know I do. There’s a reason everyone seemed to think of him as Uncle Walt. It is amazing to think so much joy and inspiration is still coming forth from this man. He made an amazing difference to the world during his all too short life. 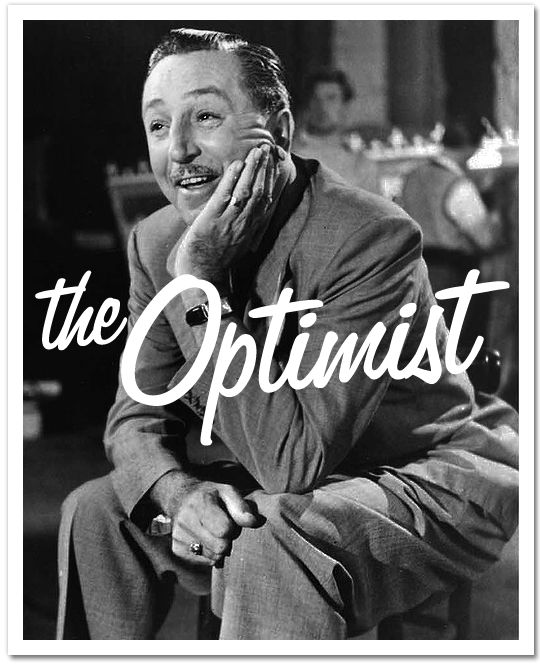 Walt represents many things to a number of people. Nobody could argue that Walt Disney was a real-life “visionary idealist” – and that trait is the big star in “The Optimist,” a new alternate reality game presented through a partnership between Walt Disney Imagineering Research & Development and The Walt Disney Studios.

This 6-week alternate reality game will engage us with social media, email, physical mail, and culminate at the D23 Expo in Anaheim, California, August 9-11, 2013.

Here is how it was explained to us on the D23 website:

“In this narrative adventure, participants around the globe linked by social media will join fictional characters to explore both virtual and physical realms, piecing together an imagined story of Walt Disney, the Imagineers and other visionary thinkers and their potential involvement in a mysterious project that sought to build a better future.”

Walt Disney Imagineering Research & Development head Scott Trowbridge is behind the whole thing, and here is what he had to say:

“…One of our characters has discovered some previously unknown facts that could change what we think we know about Walt Disney, Imagineering and Disneyland Park. Players can participate at different levels of engagement over the six-week story—from leveraging social media and mobile devices to visiting unique physical sites from the story in and around Los Angeles.”

Some characters and situations in The Optimist are based on real people and events. Overall though – the experience is just pretend – and not supposed to represent real history.

The hope is to connect people around the world with each other, and to tell a story that is unbelievable yet encouraging. We could all use some encouragement at times – so I am excited about what this has in store for us!

Visit Optimist.Disney.com to learn more about the experience and get started! If you already have an account with Disney to book your resort stays and dining reservations – you will use that same login information here.

I would like to thank Tony from the Disney Parks Podcast for inviting my husband, Chris, and I as his guests at the D23 Member Mixer. It was a great event and so much fun! Here are the details of the event as posted on the D23 Member Website.

It’s Member Mixer time at Walt Disney World! Join the D23 Team for some great food and drink—and a terrific opportunity to socialize with other D23 Members and friends!
Starting at 5 p.m., we will be kicking back in our own reserved area just for D23 Members and their guests. Upon checking in, everyone will receive one 15-percent-off coupon good on all merchandise in the House of Blues store, some goodies from House of Blues, as well as a little gift from your friends at D23.

(Here is what we got as a gift! Look for many of these items to be given away here on the blog and/or the Disney Parks Podcast! Our thanks to Ramon of ThemeParkConcierges.com for the photos!)

Guests will be able to order food and enjoy drink specials and delicious specialty cocktails. And don’t forget, D23 Members always save 15 percent off their food at House of Blues Orlando, known for their Shrimp & Grits, Pulled Pork Sliders, Jambalaya, and Hand Stretched Flatbreads.
We look forward to seeing you there!
NOTE: Available only to D23 Members in good standing. This is a non-ticketed event. Members may bring up to three (3) guests. Space is limited. Limit one coupon/gift per person. For entry, members must present a valid photo ID AND D23 MEMBERSHIP CARD. D23 Members who do not bring their membership card may not be admitted to the event. All D23 Special Events are subject to change without notice. Ticketed Members who do not attend the event forfeit their place as well as all experiences, benefits, and gifts associated with the event.