There’s a new baby at Animal Kindgdom Lodge. A rare Hartmann’s Mountain Zebra…the proper term for her is a “filly”…and she was born in October 2013. I am hearing through the grapevine that her name is Prima, although this has not been confirmed by Disney. Her photo is below, isn’t she a cutie?! 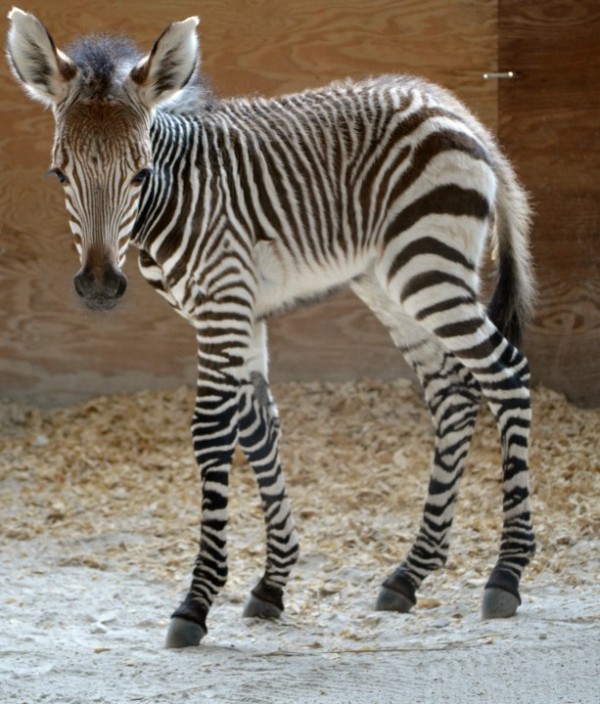 Prima’s mom was pregnant for a whole year, so you know she is probably as overjoyed as the rest of us for this new arrival. The filly and her mother are bonding well and doing fine.

Typically found in mountainous regions of southwestern Africa, the Hartmann’s Mountain Zebra is characterized by a striking pattern of narrow vertical stripes covering its head and body. They can weigh up to 800 pounds and grow up to eight and a half feet. This species is considered endangered, with only 50 of Hartmann’s Mountain Zebra in the United States and an estimated 7,000 throughout the world. Disney’s Animal Programs team is actively involved in the Association of Zoos and Aquariums Species Survival Plan for this critical species. The team is proud to have a successful birth of a rare species.

It might be fun to head over to the mara and celebrate the new baby with a zebra dome – or by doing some of the free activities that Animal Kingdom Lodge offers! I know I can’t wait to head out there to see if I can get a photo of Prima.

There are three species of zebra, two of which live on the savannas at Disney’s Animal Kingdom Lodge. You can see plains zebras as well as Hartmann’s mountain zebras during your stay. The Hartmann’s Mountain zebras (Prima and her mom) have thinner stripes that don’t extend around the belly.

Most scientists believe that the zebra’s stripes may serve to break up the outline of the zebra’s body in the herd and provide some camouflage when the zebra is standing in tall grass.

Mountain zebras eat mostly grass, bark, leaves and tree and shrub shoots. Though they prefer mountainous regions for their habitat, they are known to move to lower elevations to graze in cold weather and seek shelter in caves or wooded areas.