Special thanks to WDW Magazine for allowing me to take over their facebook page and bring you this guided tour of the Four Seasons Resort Orlando at Walt Disney World!

Check out the Four Seasons HERE

and check out WDW Magazine HERE

The perfect ending to the perfect tour!! This is from the Visit Orlando Signature Dish competition! Honey peanut butter gelato from the Four Seasons! Click HERE to vote for this dish!

If you haven’t had a chance to visit Ravello at Four Seasons Resort Orlando at Walt Disney World Resort  – here’s your sneak peak!  On July 26th 2014 – Stephen Wancha, and the team at Four Seasons, were kind enough to invite us to tour the resort. We also enjoyed a wonderful dining experience at Ravello. This was my first visit to the Seasons since 7 months before – when I was there for the hard hat tour.

Ravello is both a modern Italian restaurant and a vibrant bar on the hotel’s main floor and garden level. It’s a great place for resort guests, locals and visitors to the Orlando area to gather for fine cuisine, good times, and homemade lemoncello. It is undeniable that Executive Chef Fabrizio Schenardi’s love of food shines at Ravello. He is an Italian-born and trained chef, and he has taken full advantage of Ravello’s pizza oven AND Florida’s abundant produce and fresh seafood to create menus that change seasonally. There are two dining rooms at Ravello, as well as a show kitchen for private cooking demonstrations and special events. Check out the video below for food photos and more! 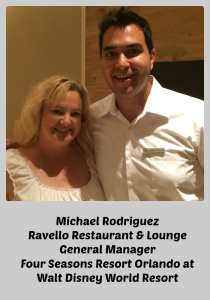 By the way….Four Seasons Resort Orlando at Walt Disney World Resort is also offering the “Good Morning Breakfast with Goofy and his Pals” twice weekly at Ravello restaurant! The buffet-style breakfast is offered on Thursdays and Saturdays, and also on Tuesdays during peak school break periods. The breakfast will feature a wonderful assortment of traditional breakfast offerings and an omelet station. A photographer will be available to capture the memories of the families with the stars of the breakfast, the always entertaining Goofy & Pals. For more on theFour Seasons Resort Orlando at Walt Disney World Resort check out our interview with Thomas Steinhauer Regional Vice President and General Manager and Stephen Wancha Director of Food and Beverage at Four Seasons Resort Orlando at Walt Disney World Resort.