Join me, won’t you? Let’s check out the keynote address of the Carolwood Society’s annual UnMeeting with Disney Legend, Walt Disney Imagineering Ambassador, and inaugural “Heart and Heritage” honoree, Tony Baxter together with Society Founder, Michael Broggie the morning of Friday, September 27, 2019 at the Disney Springs AMC 24 theater at the Walt Disney World Resort!

When I first found out about this event, I skimmed over it, and assumed it would be held in California. Upon closer look – it’s happening right here in my backyard. I couldn’t be more excited. You read that right! You can catch this amazing panel in the Orlando area!! Event check in will be at the AMC Theater entrance near Splitsville (not the one near Planet Hollywood) and parking in the Orange garage is suggested.

Even if you (not unlike myself) don’t think trains are “your thing”, this event promises to give us all a charming insight into what was such an important part of Walt’s life. I spoke to Jim VanOstenbridge – the event organizer. He explained to me in great detail that he hopes this meeting will be a stepping stone to more frequent Carolwood Society events. He’s inspired by monthly meetings that are happening at Walt’s Barn in California.

“Animators, Imagineers, historians, authors, Disney Legends, and fans come to Walt’s Barn to enjoy each other’s company, but really, it’s to spend time with Walt Disney. Diane Disney Miller, on the barn’s dedication in Griffith Park highlighted that “our heart and heritage are here in this place”. So, that’s what I’m hoping this group will evolve into. Not just a group that assembles with railroad interest, but one that celebrates the path that led to and through the barn and those who carry the torch to this day.”

Jim says he wants to do it in a way that helps bring people together in a real and genuine way. Who wouldn’t want to support that?? Let’s get in on the ground floor, together. All Aboard!!

More on Tony Baxter: This is a great opportunity to learn about the design and creation of the range of Big Thunder Mountains at Disney Parks around the world from Tony Baxter, the man who brought them to life!Throughout Tony’s 47 year career at Walt Disney Imagineering he made numerous contributions and offered guidance and leadership that is evident at Disney Parks the world over. Among his best known achievements is Big Thunder Mountain Railroad. Join us to hear the story of how this attraction came to life and how the distinct characteristics of Walt Disney World, Disneyland, and Disneyland Paris helped to make each one of these attractions remarkable in it’s own right.

More on Michael Broggie: Micheal has been featured in our series DISNEYWAYS MAGICAL SPOTLIGHTS: DISNEY LUMINARIES  You can read about him in great detail HERE! 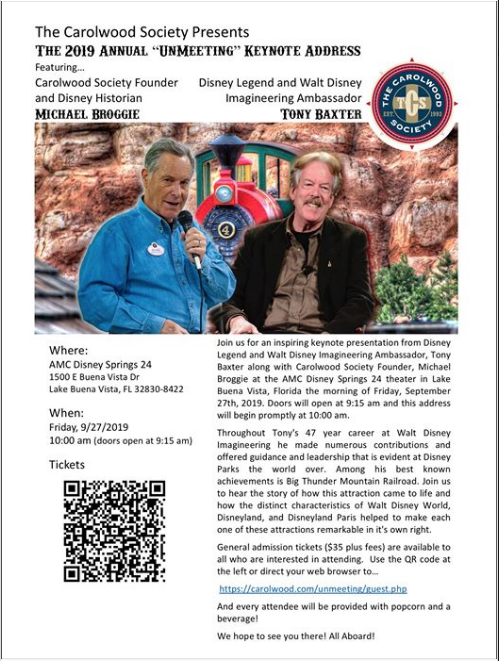 More on the Carolwood Society:

The Carolwood Society is a private worldwide membership organization dedicated to preserving the personal railroad legacy of Walt Disney.

“We accomplish through our members’ love of railroading which is shared with everyone; to teach our children to understand the role that railroads served in building this great nation, and to encourage the continual appreciation of railroading.”

Carolwood hosts several members-only social events each year which have resulted in the creation of lifelong friendships.

Did you know The Carolwood Society has a membership program? Check it out HERE and consider joining Club 173! Same dues since 1995!

The following video will take you on a tour of Walt Disney’s Backyard Train Railroad The Lilly Belle (aka The Carolwood Pacific) as Walt himself narrates and describes what it took to build this amazing miniature locomotive. Images are Courtesy of the Walt Disney Family Museum in San Francisco.