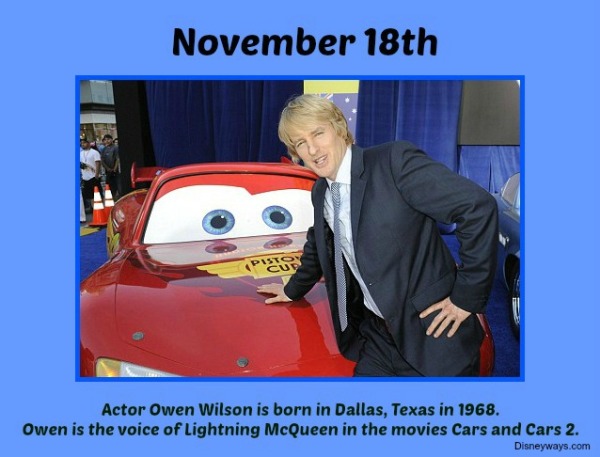 On November 18th Actor Owen Wilson was born in Dallas, Texas. The year was 1968. Owen is the voice of Lightning McQueen in the movies Cars and Cars 2.
Actor Delroy Lindo is born in 1952 in London, England. He is the voice of Beta, a Rottweiler and member of Muntz’s pack of talking dogs in Disney-Pixar’s UP.

Actress Elizabeth Perkins, the voice of Coral in Disney’s 2003 Finding Nemo, is born in Queens, New York in 1960.

This is the first year Mickey has an official birthday! We interviewed Jim Korkis for the Disney Parks Podcast recently. Jim is an amazing wealth of knowledge on all things historic with the Disney company. You can take a look at some of the books he has written all about Disney history HERE. You will definitely want to add them all to your collection if you haven’t already. During the podcast recording, Jim shared with us how there is controversy about what the actual date of Mickey’s birth truly is. However, as a general rule, Disney Archivist Dave Smith has declared that November 18, 1928, was the first general public appearance of Mickey Mouse … thus creating an “official” birth date. Have a magical day!!