Jen Jefferson is a travel agent with Glass Slipper Concierge. Jen spent some time in the parks recently and got to check out the Wii U Demos first hand! Thank you Jen for the info!
Wii U Demos at Disney – going on now through June 23rd! ~ By: Jen Jefferson
Video Gamers rejoice!  Just when you thought you had to leave your controllers at home, Disney and Nintendo have brought the living room to your vacation! Nintendo is in the Downtown Disney Marketplace to showcase their newest Wii U console and give guests the chance to test out some of their most popular games – for FREE!
The experience is  open 10am – 10pm daily, weather permitting. 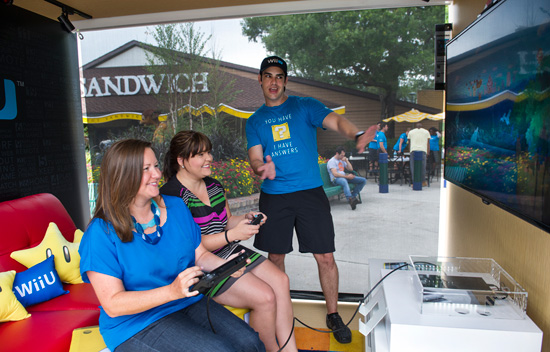 Now through June 23rd, Downtown Disney at both Walt Disney World and Disneyland Resort, is hosting these Wii U demonstrations.  Temporary living room pods are on hand, with Wii Gurus encouraging visitors to have a seat on the couch or bean bag, and try out the new U system and games like New Super Mario Bros. and Nintendo Land.  Photo ops with your favorite Nintendo character decor also abound.  The living room pods are located in front of Once Upon a Toy (Walt Disney World), and Earl of Sandwich (Disneyland). 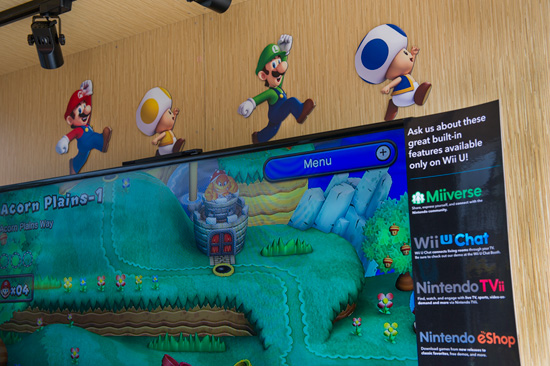 The excitement will ramp up during Car Masters Weekend, June 15th and 16th, with a preview of the new game Disney Infinity (Downtown Disney West Side, Walt Disney World).
Game On!