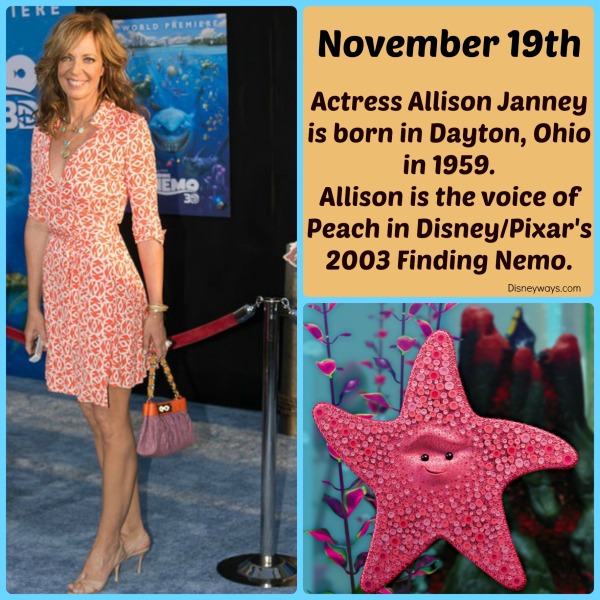 On November 19th there are a few important Disney birthdays.

1959:
Actress Allison Janney, the voice of Peach in Disney/Pixar’s 2003 Finding Nemo, is born in Dayton, Ohio. She also supplied the voice of Charlene Doofenshmirtz on Disney Channel’s Phineas and Ferb. (Allison is also known for her role as C. J. Cregg on the television series The West Wing.)

1905:
Actress Eleanor Audley, the voices of the wicked Maleficent in Disney’s 1959 Sleeping Beauty AND Lady Tremmaine in the 1950 Cinderella was born in New York City. Both characters were given facial features to resemble Eleanor thanks to animator Marc Davis.

1906:
Writer Imagineer and Disney legend William Cottrell is born in South Bend, Indiana. He was the brother-in-law of Lillian and Wlt Disney. William workde on Pinocchio, The Reluctant Dragon, and Alice in Wonderland. He was also the first president of what is now known as Walt Disney Imagineering.