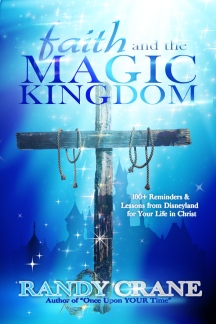 What makes Tom Sawyer Island unique and how does it set an example for taking risks as a Christian?
You can find out this answer and more in Randy Crane’s newest book that will be launched on November 15, called Faith and the Magic Kingdom. This book strives to connect spiritual faith lessons with Disneyland Park while helping to enhance the guest experience by allowing them to have a greater appreciate for “The Happiest Place on Earth.” Readers will see Disneyland in a brand new way as they experience true life in Christ, becoming more fulfilled along the way.

Lee Cockerell, a retired executive Vice President of Walt Disney World Resort says, “No matter what your faith is, you will find Faith and the Magic Kingdom interesting, educational, and inspirational.”

Randy is also donating all proceeds from the first 100 books sold during November 15 – 24 to the Special Olympics.

Randy is so convinced that people will love and be blessed by this book that if anyone buys it during launch week and hates it, all they have to do is email him and he’ll buy it back from them at the price they paid.

With this book, Randy wants to share that what we experience in every trip to Disneyland–whether we realize it or not–can have a significant impact on our lives.

With the Holidays coming, Faith and the Magic Kingdom will make the absolute perfect gift! 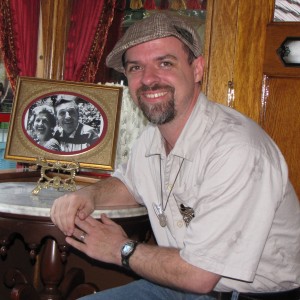 About Randy
Randy grew up not far from Disneyland, and his experiences there were just as influential on him as was his upbringing in the church. In the midst of his upbringing two things that remained regular parts of his life: his ability to write well, and his faith. He went to Bible College and became a pastor.

While in his early 20s, he realized that Disneyland was the place where he could “recapture my childhood.” The more time he spent there and got to know it, the more valuable it became to him and the more he wanted to learn. It, and its creator, Walt Disney, became an integral part of him, and he was able to use the park as a teaching tool, a writing inspiration, and a resource.

He started his journey with a single sermon and realized that there was much more to this than he’d previously thought. In July of 2010 he began blogging it at FaithandtheMagicKingdom.net. Last year he published his first book, Once Upon YOUR Time: 7 Strategies for Gaining Control of Your Time Through a Tour of the Magic Kingdom. Faith and the Magic Kingdom is his second book.

For more information about Randy Crane or his new book, Faith and the Magic Kingdom, visit faithandthemagickingdombook.com

To learn more or to schedule an interview with Randy, please contact: Randy Crane at randy@faithandthemagickingdom.net

Get your copy of Faith and the Magic Kingdom HERE